How to render animal fat

Animal fat is the best for cooking because it’s the one that resists better heating.
But nowadays it’s difficult to find not hydrogenated animal fat in the groceries or butchers, and even more a fat that comes from pastured and organic animals. Read more about animal fats and health here.
In this article you will learn how to make homemade animal fat.

Beef tallow: bones from the spine or others, fat meat such as shank
Duck fat: duck breast with fat or a whole duck with skin
Lard: Unrendered pork lard

Duck:
Cut skin and fat into medium pieces and put into a medium heavy-bottomed pot.
Add 1⁄2 cup water and salt and simmer over medium heat until water evaporates and skin pieces are crisp and have released all their fat, about 1 hour.
Strain clear fat through a sieve.
Source: http://www.thebittenword.com/thebittenword/2009/03/rendered-duck-fat.html

Pork:
Chop the lard up before throwing it in the crock pot.
Add about 50-100 ml water and salt and simmer very slow with the lid on.
After an hour or two, once the fat has started to partially liquefy, remove the lid of the crockpot to allow any remaining water to evaporate.
As soon as you notice that the mixture is about half liquid and half solid, it’s time to start removing some of the rendered lard in order to help the remaining fat chunks cook down furthe.  The best method for separating the solids from the liquid is to use a ladle, a sieve (or some cheesecloth), and a separate bowl to collect the liquid lard. As you do this, return the solids to the crockpot to continue the rendering process, wait a few minutes, and repeat. Little by little you will continue this procedure until there is only small amount of relatively dry solids in your crock.
The solids that are left behind are called “cracklings.” They consist of minute pieces of tissue that had previously held the pig’s fat together. This is also where the little streaks of red meat mixed with the back fat end up. At this point the cracklings should be soft and not yet crunchy in texture. When you’re satisfied that you’ve gotten virtually all of the liquid lard out of the cracklings, you’re done with the lard making process. It is best to let your bowl of liquid lard sit for a few minutes to cool in order to be able to ladle it into jars without the risk of them breaking from the heat of the lard.
Meanwhile, throw your cracklings on a cookie sheet and bake them at about 190F for about 20 to 30 minutes. Once they’re crispy, they’re ready to be eaten.
Source: http://robbwolf.com/2013/02/21/render-lard-and-free/

Beef Tallow:
Make a bone broth, simmering them with salt for about 12-24 hours.
Strain fat through a sieve.
Let it cool down at room temperature and keep in the fridge for a day.
A lot of fat must have risen and congealed while the broth cooled in the fridge. Then, you can get the fat from the surface keeping away and cleaning the gelatine or water. 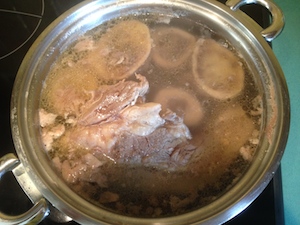 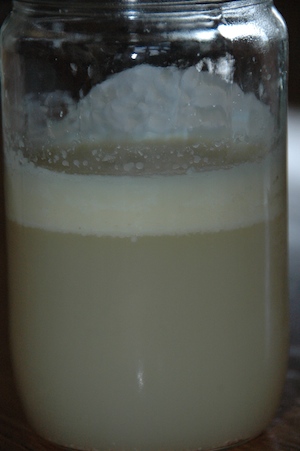 Preservation:
Naturally rendered lard has a fairly long shelf life in well-sealed jars even at room temperature but it’s best to keep it in the fridge just in case it takes a few months to use it all up. It will last almost indefinitely in your freezer.

More about: fat
Gemma Calzada
<<Previous
Next>>
All sections | Sections | All articles | All languages |